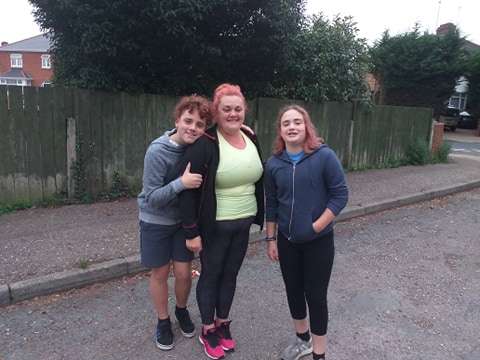 ← Together Alone: Running Under Lockdown Welcome! →

“After being locked down and working from home from March and the children being home I realised that after some weeks we weren’t getting any exercise, everyone had fallen into a slump of rolling out of bed and sitting at our makeshift desks and not moving enough. I felt sluggish and the children were restless, something had to change.

“I had tried C25k (couch to 5k run) many years ago with little success and wanted to try again. So on the 15th June I set my alarm and woke the children at 6am, we started week one, run one together and had committed to this routine ever since.

“We get up every week day morning, if we aren’t running we walk – sometimes 45 mins sometimes 20 mins – but we have all committed to getting out and starting the day with some kind of activity. It has made such a difference. The mornings have been the turning point I think as it’s a time we can all do and again this isn’t something historically I have found easy but seeing the sunrise or being out in the rain gives you a real boost for the entire day.

“My own fitness has developed beyond recognition and last week, 14 weeks after embarking on this journey, I completed my first 10k run and it felt fantastic. The children don’t always run but they always come out and walk and it’s been great I am very proud of them for committing to being active. It’s improved their personal fitness and restlessness.”

“A friend contacted me after seeing myself and children’s journey and so I am currently supporting her through her C25k, it feels fantastic helping someone else achieve a goal she also believed was out of reach.

“I have never been someone who has been overly active and as everyone says ‘if I can do it anyone can’. That testament is so true for me because in the beginning running for 60 seconds felt awful, my breathing was off, my legs hurt and I never in a million years thought I would be able to achieve running for a 10k, but now the sky’s the limit – I want to see how far I can go! I don’t care too much for speed but I do want to see where this journey takes me and entering into virtual events has also been a good way to focus. I did a virtual 5k in September and have a virtual 10k booked for October – receiving a medal is awesome!!!

“It’s also super important to say that not every run or walk is successful, I don’t live in a Disney film, sometimes the children fight all the way and sometimes I can’t run the full amount of time I want to or sometimes it just hurts too much. As a friend (who runs) said to me: running is a mind game, once you achieve sustaining running for 30 mins after that it’s more about telling yourself you can do it because you head will probably be telling you to stop! The most important to part is to keep trying, if you have a bad run/walk or you oversleep or you’re just not feeling it one day, don’t give up, try again the next day. We are our own worst critics but we should be our own best supporters.”

“I cannot express enough how much being out and being active has improved not just my physical health but also my mental health, especially with the current climate. Feelings of restlessness have understandably increased so being out first thing and enjoying the outside has been incredible. I feel like just making those few changes has had a significant impact, don’t get me wrong some days when they alarm goes off I want to snooze it but then I remember how it feels when we have finished and drag myself up and get out.”