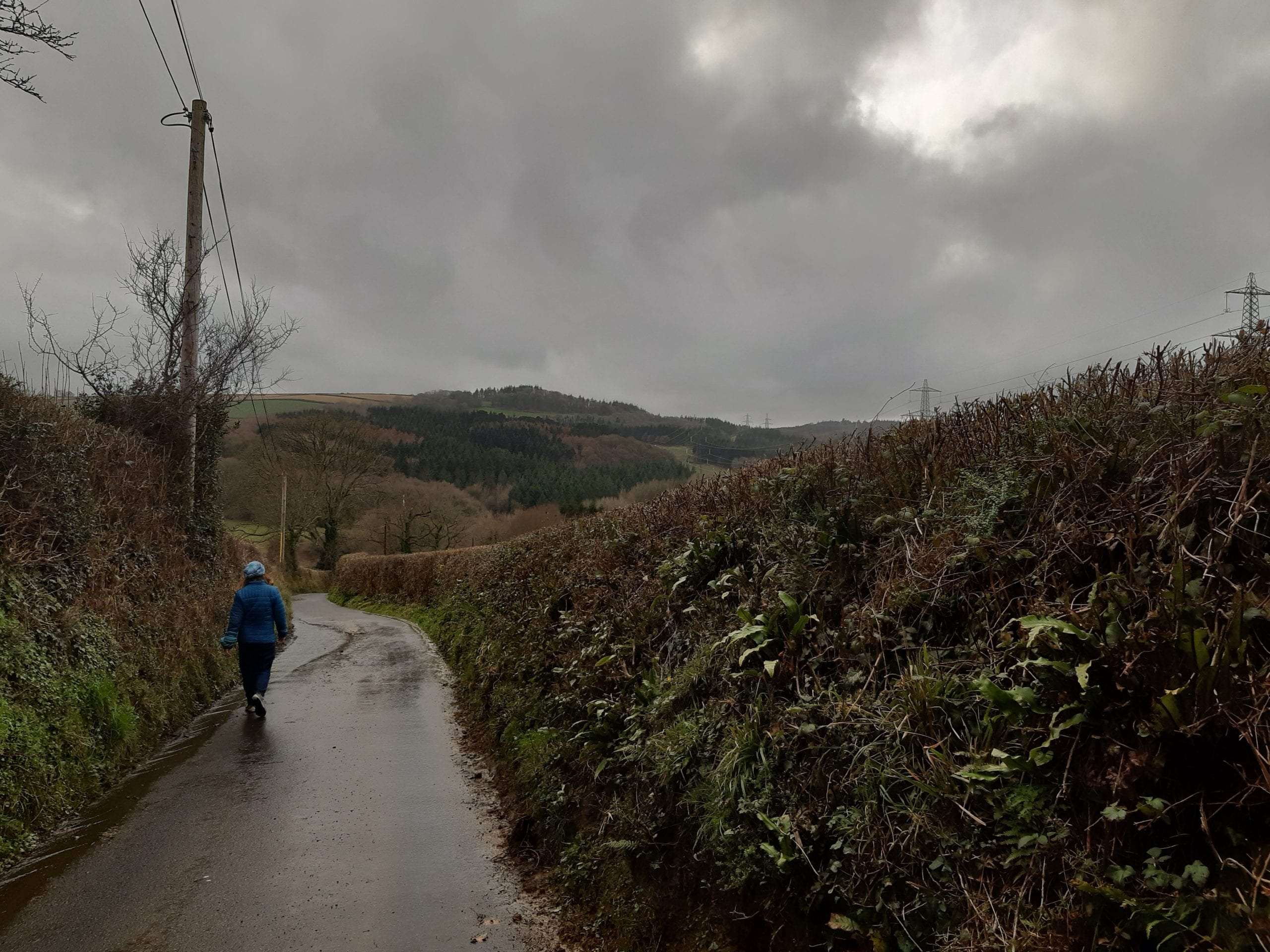 Les Bright of the Exeter Ramblers has written this week’s blog, telling us how walking in the local area has kept him and his wife, Jane, going through a tough year.

Photo of Jane, walking down College Lane to Ide – will she beat the rain?

I’m writing several weeks after the first Exeter & District ramble of 2021, on Sunday 3rd January. That walk, led out of Ottery St Mary by Margaret Piper, turned out also to be the last of the year as a result of the national ‘lockdown’ which was announced the following day. In the course of an e-mail exchange with her husband Colin, he told me that he had flattered her with the words, “Everybody agrees you led the best walk of 2021”. No offence intended Margaret, but I hope there will be some competition for you over the next 9 months.

I have walked most days, generally with my wife Jane, but on a limited number of occasions with other walking partners. Some of these outings have been focused on assessing a walk, and checking whether the written walk description, intended for our planned book, could be followed and would make sense to a casual reader – ‘did what it said on the tin’.

However, much of our time has been spent walking closer to home. We have developed a number of circuits from our house – some heading for the city in order that we can buy fresh local vegetables from the Real Food Store in Queen Street (other shops are available!), while other routes take us away from the city, heading south and west to Shillingford and Ide via Alphington. Such walks provide extensive panoramic views across the city that can look different day-to-day, dependent on the weather. On other occasions we have headed to the river and canal, though this area is often very busy. It is good to see so many people out walking but we definitely steer clear of the quayside if the sun is out as the number of walkers, cyclists and dogs increases dramatically – but the footpath width remains the same!

Rather than ‘familiarity breeding contempt’ I have found myself becoming absorbed by details of buildings in the city and suburbs, that had hitherto appeared unremarkable to me; small changes to visibility in country lanes as a result of man and nature (hedge cutting/ seasonal leaf shedding); and identifying with other recreational walkers as we pass and exchange greetings.

We have also watched the small herd of pigs at West Town Farm move back and forth across the hillside turning over the land and fertilising it, sector by sector as directed by the farmer; seen cattle munching their way through pastures and then being moved; and noted the emergence of streams of water rushing downhill following rain… None of this is extraordinary, but it nevertheless provides interest and things to mull over as we walk. And then there’s been the birdsong – some days it seems like birds are ever present companions – hordes of small birds with big voices, and yet a few days later there is neither sight nor sound of them.

When the restrictions are lifted we shall walk elsewhere – on Dartmoor, the coastal path and the surrounding counties – but I sense we shall find it difficult to let go of the new love of ‘walking closer to home’.

Les and the Exeter Ramblers have produced a delightful book, ‘Walking Around Exeter, a selection of walks for all’, which will be available soon to help even novice walkers create their own adventures around the Exeter area. Get in touch at orders@exeterramblers.org.uk to find out more about the Exeter Ramblers or to grab a copy of the book!