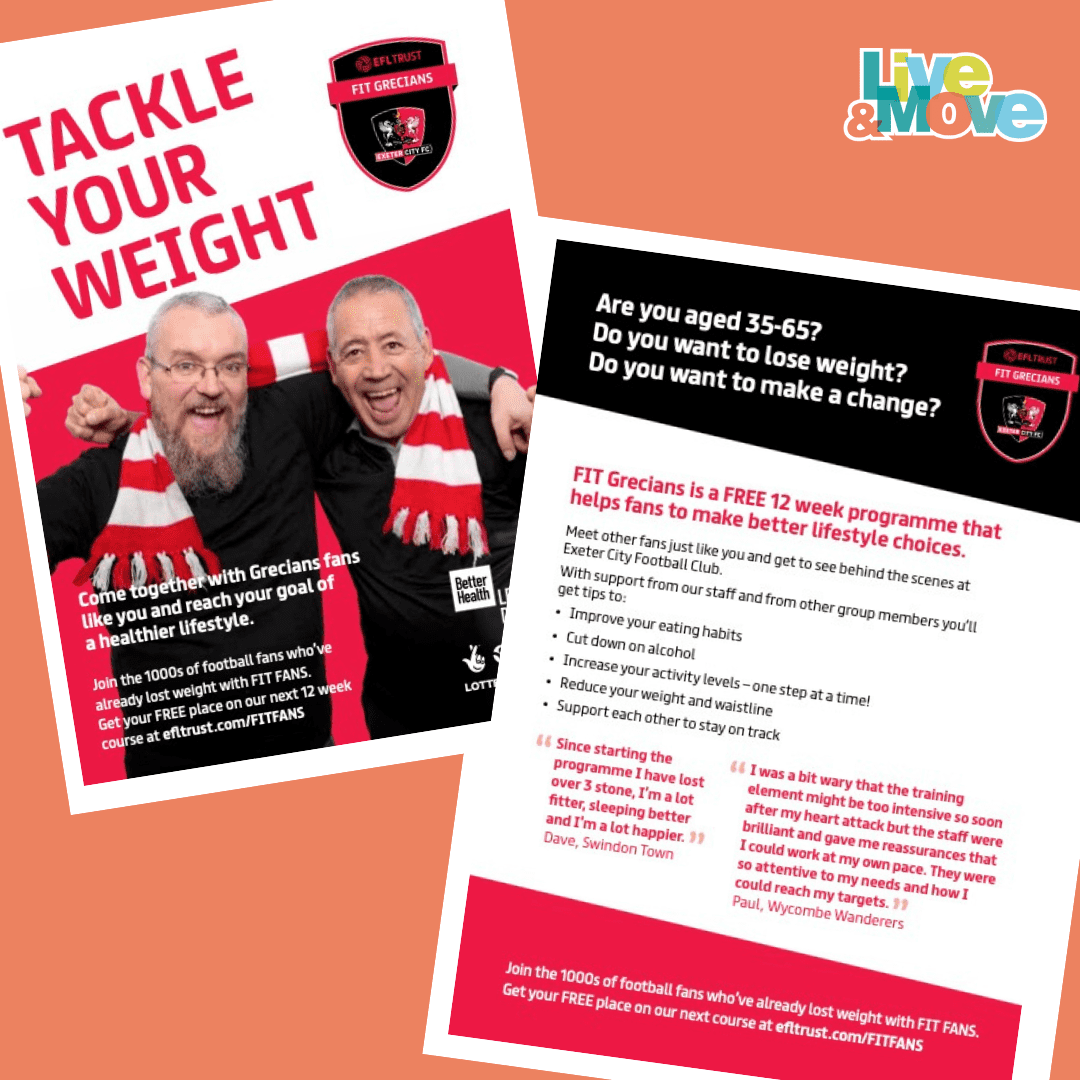 Lots of plans aimed at helping us all to lead healthier lives come with a hefty price tag. Many are aimed at women. And often, the time commitments that you’d need to give, make such a programme unsustainable from the start.

So, what if we told you that there is such a thing, aimed at men, that doesn’t cost a penny, and is right here in Exeter? And genuinely works to help its participants to lead healthier lives, forever?

Fit Fans is a unique programme organised by Exeter City Community Trust in Exeter, aimed at male football fans aged 18-65. The group operates with the aim of helping people to lead healthier lives – something that Live and Move is also trying to do. We thought we’d try to find out a bit more about this fabulous sounding initiative!

Fit Fans was piloted last year. The group runs for three months and operates via a weekly catch up at the home of Exeter City FC, St James Park. If you’re imagining those ‘weigh in’ type sessions, you’d be mistaken. Instead, while there is a weighing element to the course, it’s essentially an informal catch up with mates, but with heaps of positive support provided on nutrition, training, and lifestyle.

Of the participants who took part in the first cohort in 2021, more than 90% of them achieved their target weight. But let’s remember, this isn’t specifically a weight loss initiative. It’s a community focused programme aimed at making it easy for people to be healthier, every day. The focus is on finding ways that we can all lead healthier lives.

Organised by Dr Will Barrett, the growth and development officer at Exeter City Community Trust, the initiative is part of a programme licensed by the EFL Trust. Initially taking place in Scotland, it’s now being rolled out at football clubs across the UK, and the ECFC/Exeter City Community Trust part of it will soon extend to north, mid and East Devon, with Plymouth Argyle rolling out a similar programme later this year.

Will said: “Encouraging people to lead healthier lives is an absolute priority especially on the back of Covid-19. Our aim is to remove barriers to participation so that it’s easier than ever for people to get involved, and to make life changes that will stick.”

He added that one of the most successful elements of a programme such as this is the peer-to-peer support that it gives. As well as giving the group access to coaches, trainers, and nutritionists, it also introduces participants to others just like them.

Will told us that the football club is well placed to roll out something like Fit Fans: “Exeter City is a community-focused football club and through its charity partner, Exeter City Community Trust, it’s absolutely committed to supporting people in the city to lead great lives. Ensuring that participants have the access to the advice and support that they need, is absolutely integral to this.”

And apparently there are small changes that we can all be doing that could make a massive difference to our lifestyles.

Will told us: “We all know that we need to do these things but it’s small steps such as drinking the recommended amount of water for instance, that really have a huge impact. If you’re trying to lead a healthier life, this is a great place to start. It cleans out your whole body including your brain, and makes you feel great!”

The latest course of Fit Fans has just started but Will is keen to stress that participants are still able to join for the next couple of weeks. And his favourite success story from the last course was from one participant that he saw on his way to the football ground.

He said: “I was about to hop on a bus in St Thomas to come up to a Fit Fans session one Wednesday evening. One participant from the session went past me walking with his bicycle. I felt despondent as I realised that he obviously wasn’t coming to the session as there was no way he’d get there in time. I got there and told the other coaches that I didn’t think we’d see that particular chap on that day. Two minutes later, he arrived, on his bike, having cycled all the way up the hill from St Thomas to St James Park. He’d invested in the bike and in the time to ride it, because he wanted to be more active for his young children.”

If that inspires you, find out more and get involved with Fit Fans at: https://exetercct.org/fit-grecians/

If you represent a community group or club that helps to inspire others, we’d love to hear from you!

How’s it going? We’d love to hear your stories and you never know, it might help to inspire others. Get in touch or email eleanor@mcmu.co.uk.